The theme of this year’s World TB Day is: Wanted: Leaders for a TB-free world.

You can make history. End TB 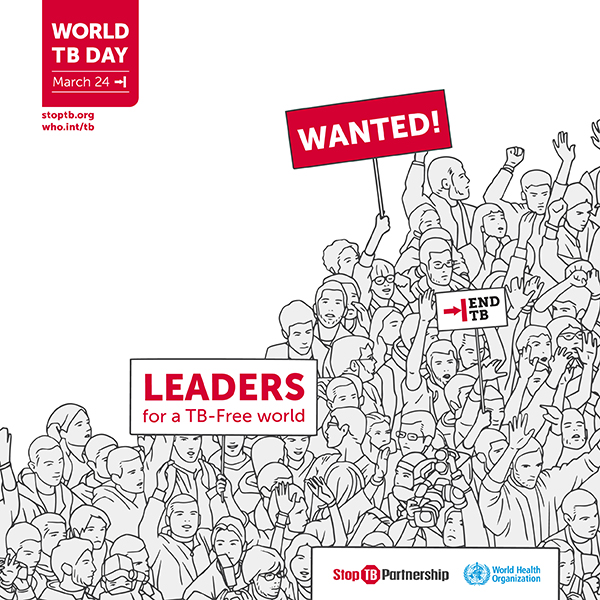 Each year we commemorate World TB Day on March 24 to raise public awareness about the devastating health, social and economic impact of tuberculosis (TB) and urge acceleration of efforts to end the global TB
epidemic. This year, we commemorate the 136th anniversary of Dr. Robert Koch’s announcement in 1882 of his discovery of the TB bacillus, the cause of TB. His groundbreaking research opened the way toward diagnosing and curing this disease.

Despite significant progress over the last decades, TB continues to be the top infectious killer worldwide, claiming over 4500 lives a day. The emergence of drug-resistant TB (DR-TB) poses a major health threat and could put at risk gains made in efforts to end TB.

Wanted: Leaders for a TB-free world

A TB Leader is a head of state, minister, mayor, governor, parliamentarian and community leader. A TB Leader is also every person affected by or active in TB and willing and daring to speak up and engage to end TB
through their work and personal engagement.

Get involved. Promote World TB Day to your friends, colleagues and contacts over social media.

Visit the key websites below for more information.

Our thanks to World Health Organization (WHO)and Stop TB Partnership for providing information for the website.